Samuel Ajayi Crowther (c. 1809–31 December 1891), was a Yoruba linguist and the first African Anglican bishop in what is now Nigeria. Born in Osogun (in what is in Lanlate, Oyo State, Nigeria), he and his family were captured by Fulani slave raiders when he was about twelve years old. Crowther was freed from slavery at a coastal port by the Royal Navy's West Africa Squadron, which was enforcing the ban against the Atlantic slave trade. The liberated peoples were resettled in Sierra Leone. In Sierra Leone, Ajayi adopted an English name of Samuel Crowther, and began his education in English. He adopted Christianity and also identified with Sierra Leone's then ascendant Krio ethnic group. He studied languages and was ordained as a minister in England, where he later received a doctoral degree from Oxford University. He prepared a Yoruba grammar and translation of the Anglican Book of Common Prayer into Yoruba, also working on a Yoruba version of the Bible, as well as other language projects. This photograph was taken in 1867. 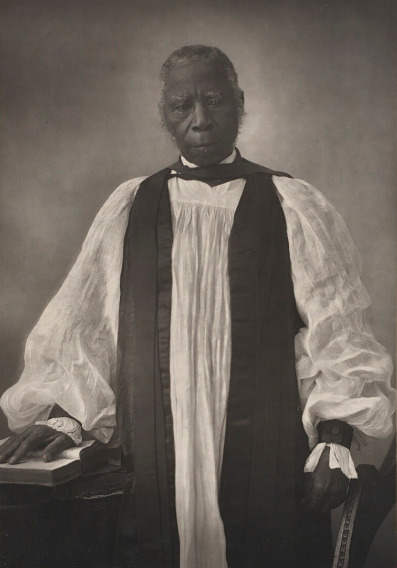